The horrific violence that occurred last week between police and Black Americans hit home when my daughter Maya, 23, announced she would be attending a Black Lives Matter rally in Inglewood.

She came into my bedroom a day earlier looking for a hug to help assuage the sadness, anger and frustration over the deaths of Alton Sterling in Baton Rouge and Philando Castile in Minnesota, both black men killed by police. Video shows excessive force wasused in both cases.

I was both afraid and incredibly proud of Maya’s decision to express her First Amendment rights.  It’s one thing to watch on television, and quite another when the protestor is your own child.

“I know you’re not feeling the police now, but if they tell you to do something, please do it,” I said.  I prayed and sent her on her way.

When she returned, I asked how the police were.  “There weren’t any,” she said.  I was stunned.  It was the confrontation that never happened.  No police, no riot gear, no unruly mobs burning down the city or vandalizing businesses.

Turns out there was no need for police to show up ready to do battle with the 1,000 or more peaceful activists who walked down Manchester to Randy’s Donuts on La Cienega to protest the killings.  It was a tactical decision made by Inglewood Mayor James Butts and Police Chief Mark Fronterotta.

Rather than rush in, military style, and try and shut down demonstrators, the command was given for police to stay away from the immediate area.  Officers were ready to spring into action within a minute if needed, but mostly allowed activists to do their thing.

It was a decision that I believe more police departments should make.  It won’t work everywhere with everybody, but it should at least be considered.

Other than temporary traffic congestion, including a brief shut down of the 405 Freeway, the demonstration went on without incident. No arrests, no violence and no threat to public safety or property.  Demonstrators got the attention they were seeking, but not for negative reasons.  News teams who covered the story came out of curiosity.

The notable absence of police flipped the script on what is usually expected to happen when people of color protest and police are involved. However, as Mayor Butts, the former Santa Monica police chief, pointed out, having officers come out in traditional riot gear can make matters worse.

“Here’s what it does – it makes it more media-worthy,” Butts told reporters. “It tends to amp up the protesters, it makes them tend to feel like they’re under siege and things are more volatile.”

Being a cop is not easy, and Inglewood police showed a tremendous amount of courage and restraint, especially in light of the retaliatory killings of police in Dallas, in response to shooting deaths of Sterling and Castile.

“I am extremely proud of the performance of Chief Fronterotta and the men and women of the IPD in their handling of Sunday’s protest,” Butts told Inglewood Today.  “They ensured the participants were allowed to exercise their First Amendment rights while minimizing inconvenience to the public and ensuring public safety.” 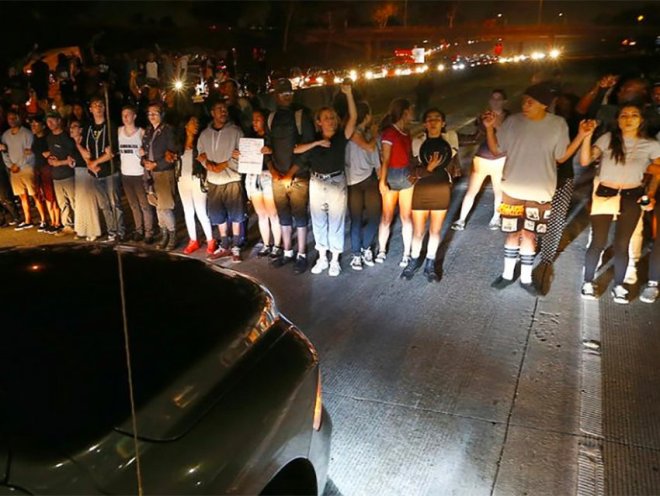 Despite deep concerns about this senseless and seemingly never ending violence, I slept well that night.  I felt good knowing my child could express herself without becoming a fatality—at least in Inglewood.