Where it’s at, Where it’s going
By Veronica Mackey 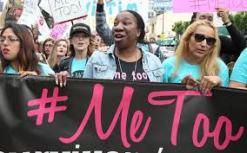 In 2017, powerful men were brought down by women accusing them of sexual assault and harrassment. It’s clear now that male-female relationships, particularly in the workplace, will never be the same. The question remains: Where do we go from here?

Since #MeToo began exposing sexual misconduct in high places, it has become a global movement. Inappropriate sexual behavior by men has emerged from behind closed doors into the public square.

Not since Women’s Liberation, have relations between men and women felt more tense. And like Women’s Lib, this issue is sure to change the very culture of American life—from how we date to how and where we work.

This is the goal of Tarana Burke, the black woman who originated #MeToo in 2005. She’s concerned about who Hollywood is naming as leaders and that the movement is getting too far away from where it was intended—as a support group for black and brown victims—basically, for the “invisible” women of society.

Currently, only large companies or government agencies are required to adopt policies to address sexual harassment—leaving a glaring loophole for mom-and-pop operations. But that, too, is changing as more small companies seek to protect themselves from lawsuits. If this movement is to be sustained, laws must be changed to protect the most vulnerable at every level.

Not entirely unrelated is the matter of age. What may have been seen as a gesture of affection (i.e. a pat on the butt) 20 years ago could be a prelude to a lawsuit today. Meanwhile, as we struggle to define or re-define sexual assault and harassment, there is sure to be more fallout between the sexes.